Robbie has exhibited his distinctive narrative drawings and paintings throughout the UK since 1990 including the recent critically successful ‘Invasions and Excavations’ at the Open Eye Gallery in Edinburgh. His work can be seen in several public collections including the Otter Collection in Chichester and Grampian Hospitals Arts Trust. He has won national awards over his career including the Guthrie Medal at the Royal Scottish Academy and most recently, in 2016, the inaugural W Gordon Smith painting prize at the Dovecot Galleries in Edinburgh.

Born in Liverpool in 1964, he grew up in Aberdeenshire, before graduating in Painting at Edinburgh College of Art in 1990. Since then he has successfully worked as both an artist and an art lecturer; first at Gray’s School of Art in Aberdeen, then at the University of Chichester (where he was the Head of Fine Art) before moving on to the Kent Institute of Art and Design and Oxford Brookes University.

In 2007 he became coordinator of short courses at Edinburgh College of Art, and now as part of the University of Edinburgh he is an art lecturer within the Centre for Open Learning where his has won several awards for innovation in creative learning and teaching. He was President of ‘Visual Arts Scotland’ from 2013-16 where he helped redefine it as a leading platform for contemporary makers in Scotland, curating three critically acclaimed exhibitions at the Royal Scottish Academy. In 2017 he was elected an Academician of the Royal Scottish Academy.

Robbie Bushe’s recent art practices straddle the use of fragments of research, daydreams, observation and pictorial reconstruction.  His structural but free-flowing drawings take as their starting point sprawling cities built on monumental panoramas – both improvised and real – to create elaborate theatrical environments as a stage for buildings, civil engineering, transportation, people and their stories. He invents characters within a cinematic context, involving himself in reimagined mythology often borrowed from and celebrating the tropes found in late 20th Century science fiction film and tv: see, for example, Gene Rodenberry’s utopian vision in Star Trek of humans reaching out to ‘new life and new civilisation’ to the culture of wonder, paranoia, hoaxes and conspiracy conjured up by the Roswell Incident autopsy photographs from the 1960s.

He is awaiting the results of DNA testing but all indicators suggest he will have Neanderthal DNA. 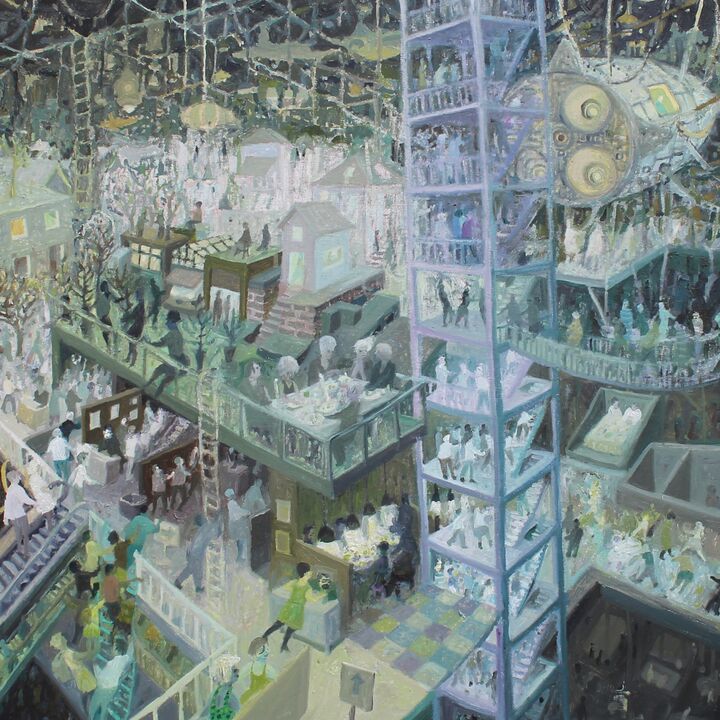