Dr Jeanne Cannizzo is an anthropologist, curator and artist. As a Senior Lecturer in Social Anthropology at the University of Edinburgh (1994-2009) she taught senior undergraduates and post-graduates about material culture, the anthropology of art, critical museology and ethnographic photography. She was an occasional guest curator at tScottish National Portrait Gallery –with major exhibitions on David Livingstone (which also appeared at the National Portrait Gallery in London) and Sir Walter Scott; her last exhibition in Edinburgh at the Portrait Gallery was Our Highland Home: Victoria and Albert in Scotland. She also lectured on various portraits in their extensive collections – many of which were about people whose lives illustrated the strong historical connections between Scotland and Canada.

Her own work as an artist has been shown in juried exhibitions in Dundee, London, Florida, and Canada. A solo exhibition at Winchester Modern, a commercial gallery in Victoria, British Columbia drew upon three different events: Small Boys Unit is about the children who were forced to become combatants in the 1991-2002 civil war in Sierra Leone, West Africa, where she did her doctoral research on children’s masquerades. Northern Waters is her response to the sinking of the ‘Kursk’, a Russian submarine which went down with a crew of 118, in the Barents Sea, in 2000. At least 23 men survived the explosion and several lived long enough to write final notes of love and farewell to their families. Fear of Flying, illustrates some of the ways the artist tries to calm her anxieties about flying and includes not only drawings of banded Galloway cows, but also her own ‘improvised explosive device’ sculpture in the form of an electrified coyote.

The work most closely related in many ways to this proposal, especially in its intellectual underpinnings, was created with co-artist Joan Smith of the ECA.  Smugglerius Unveiled was on display at Talbot Rice Gallery gallery of the University of Edinburgh in 2010. It featured a plaster cast known as ‘Smugglerius’, made in 1854, which had been used to teach art students at the Edinburgh College of Art about anatomy in the 19th century and into the 20th. The original cast was made in the late 18th century, by sculptor Antonio Carlini of the Royal Academy of Art in London, from the flayed body of a criminal who was hanged in 1776. In order to ‘restore’, even if only partially, the human identity and the skin which Smugglerius lost was draped the figure with different materials- including white linen, black crepe, and a reddish cowhide. Student Caroline Douglas photographed and enlarged the results to life size.

All Cannizzo’s work, both academic and artistic, has explored cross-cultural encounters, the complexities of the relationship of the past and the present, and the intersection of art and anthropology. Cannizzo is 1.8% Neanderthal and 2.3% Denisovan. 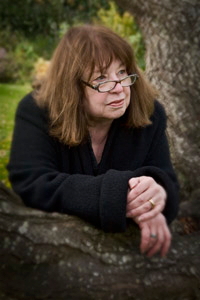 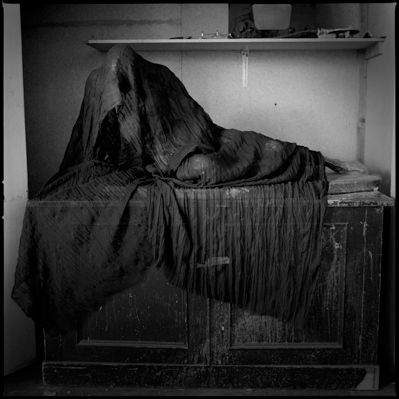 ‘Smugglerius Unveiled’ Photograph by Caroline Douglas in collaboration with Joan Smith and Jeanne Cannizzo at the Talbot Rice Gallery Edinburgh 2010. 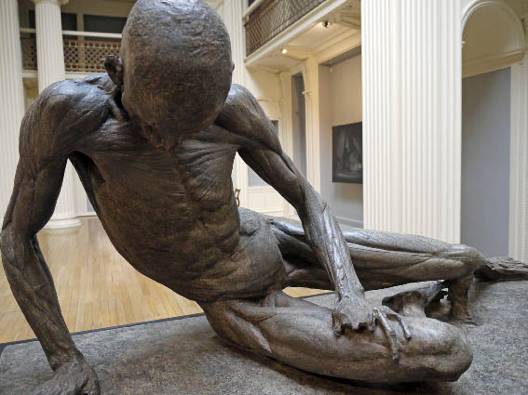