Robbie Bushe’s four large scale paintings follow the journey the last of the ancient Neanderthals some 30,000 years ago. A  solitary female lovingly tends her wild garden as she prepares for the end of her species while modern humans search for the secret of their de-extinction, fully realised some 30,000 years into our future.

The paintings, while intended as works in themselves, are also the trigger and backdrop for an animation short which extends and plays with the narrative. 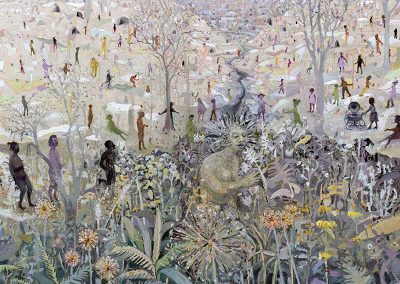 Some 30,000 years ago, early modern humans come to pay their respects to the last of the ancient Neanderthals, a solitary female lovingly tending her wild garden. She has only hours to live. But the moment has been prepared for… 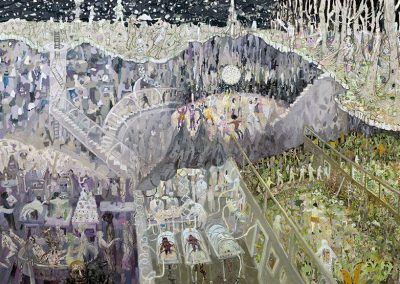 On the DNA Dancefloor

An imaginary scene over thousands of years as early modern humans and Neanderthals interact – hunting and gathering, dancing, and interbreeding. 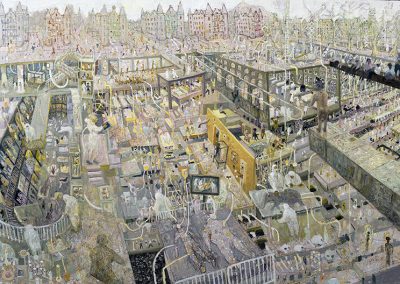 Present day, hidden under many forgotten or disused hospitals, are warrens of still- functioning operating theatres, recovery rooms and laboratories. They have a single goal: to bring back the Neanderthals. Why? To see if they and other archaic humans might have their own, different ways to save our planet and give us all a future… 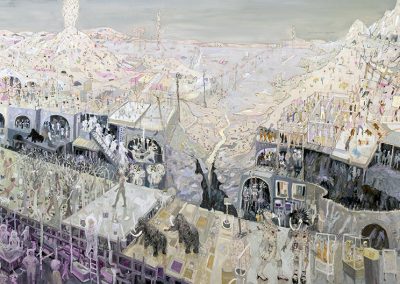 A world, 30,000 years hence, where the re-emergence of the Neanderthals through DNA cloning is now well established, and they form the majority. But some early modern humans reject the idea that there are a multiplicity of ways to be human; that diversity provides the chance of finding solutions to common problems, whether environmental, political or social.