The sunrise and the Trodos Mountains 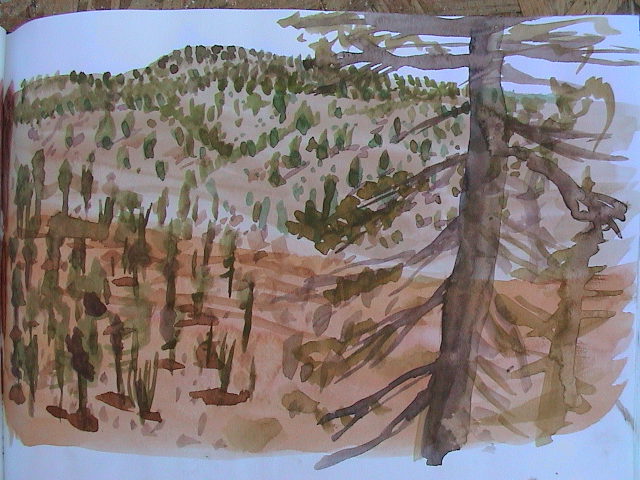 It is now near the end of my second week in Cyprus and things are now settling down into a routine. People’s personalities have now become clearer to each other in the group, which is both a good thing and a bad thing. There are at least half a dozen really nice people who I am enjoying spending time with immensely and we have developed a late night card school over a few Keo beers.

On Sunday night there was a cafuffle after a girls night out at 3 in the morning and caused a rumpus which kept me awake all night. But actually they did me a favour as Tom suggested we make the best of it a walk down to the pier and watch the sunrise. It was amazing! And so clichéd that no one would ever to attempt to paint it. Except me, after a sleepless night. Here is the result. A Czech girl Lanka has been trying to capture the sunrise in her paintings, so I thought I would give a go too..

Spent the rest of Monday in a hammock trying to catch up on my sleepless night.

Tuesday brought a group bus journey up to the Trodos mountains. This is what I have been waiting for; another look at the distinctive landscape within Cyprus. I am now in full flow scribbling in my book, which is great. I went on a 6K walk over the hills and did three little watercolours in my book.

Anyway, the trip in the mountains gave me a few ideas for pictures and today I started one which I think might be quite fun.

Still a fair way to go and as usual (at least when I am in Cyprus) I am starting at lot of pictures and not quite finishing them. Well it makes my studio look full.

It has got increasingly hotter as the trip has gone on and until yesterday i was coping with it well. Today it reached 44 degrees and there was no escape except here in the internet cafe.

Looking forward to my trip to Paphos on Saturday, where I will meet Joe, Fiona and their daughter Maisy who are just over from Aberdeen. And I am giving a talk about my work at the Lemba site where I was in 2002. So, I expect my next blog will be on my return after the weekend.