The Eels and More Painting 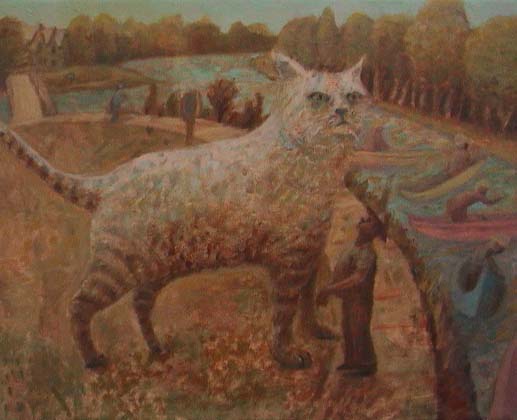 On Wednesday I went to see the Eels with Richard at the Royal Abert Hall. It was my first time on both accounts and while it would have been nice to know a few more tunes by the Eels before I went, it was great to be sitting up in the circle of this vast very famous venue. By complete coincidence, I met my friend and studio mate from Oxford, Anna and her husband Simon in the Albert Hall bar just before the gig.. and they had also been to the Nick Drake night I went to last week as well. I think they must be stalking me….

And so the weekend came and on Saturday, Nick from Chichester came to my studio with a van to take two pictures away to be entered into the Chichester Open. Nick (who is and old student of mine from UCC) is the administrator for the Open and wanted to visited Oxford anyway to see an exhibition at the Christ Church Picture Gallery. I entered my two larger paintings from last year: Battle for Chichester Cross and Battle of Hastings Gardens. Neither work has had an airing and I have never shown in Chichester before (except at UCC) despite living there for 5 years.

Meanwhile back in the studio, the painting continues.. I worked a bit more on these two:

Then I worked these slightly more loose and expressive works which are quite exciting me:

However, I have been concentrating too much on the so-called jungle pictures inspired by Rosseau, that I had forgotten about the ones I have to do for the Scottish Gallery with the theme The Human Condition. So I dug out some half finished pictures from the end of my time in Hastings which I had abandoned and sanded them back and started this series: