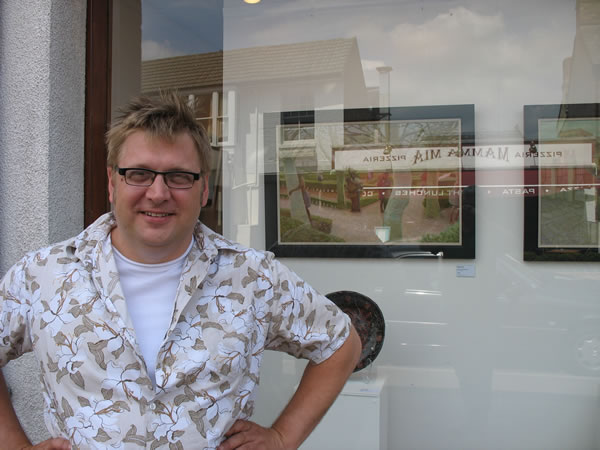 Well here I am in Limassol, Cyprus again. I have been here a week and have just about settled in. But more of that later.

The last two weeks in Oxford were full on to say the least; the Brookes foundation shows went up and had a jolly private view. My boss also had a couple of retirement dos – She is retiring at the end of the summer. Brookes have only just made a short list of replacements for her post. So, by the time I get back to Oxford, I will have a new boss.

I also moved out of the room I was staying in Oxford. So thank you Rachel and Michael for making my stay in your house easy and relaxed. This is now my 26th move in my 41 years of life. I moved everything out just before my exhibition at Sarah Wiseman Gallery on Saturday 24th July. It was an all day Saturday opening, so I hung around most of the day at the Gallery, meeting friends and visitors who came along. it was great that Billy and his whole family came from London with their bicycles. They went for a bike ride after seeing the show. I think my work looked fine in the show, but I am too close to it to judge. Catharine came along later in the afternoon as she works on Saturday morning. I had all my stuff for Cyprus ready and packed, so Catharine picked it all up and me and I stayed in Reading on Saturday night, so she could drive me to Luton airport early on Sunday morning.

All was going well on Sunday morning as I was driving in good time to make the airport along the M40 when all of a sudden a pick up truck in front of me lost the inside perspex moulding of its container and it was sitting right in front of me of the carriage-way I was driving. I jammed on the brakes and tried to turn into the inside lane which resulted in the car skidding and not quite missing the debris. I somehow managed to get the car to the hard shoulder. The car was mostly ok but there is something up with one of the wheels when we drove off again. We were both extremely shell shocked for the rest of the journey and were very luck not to be killed.

So I flew out to Cyprus on Sunday and got to Limassol about 7pm. No one was at the college and I suspected they were all out watching the England – Ecuador game in a bar. I was right. Andros, the College and Studio manager, met me a took me out for a simple dinner in Heros Square. I am staying in the flat above the studios which used to be the projectionist’s rooms in what was an old cinema. This is where Grahame Parry lived before he moved back to England a few weeks ago. He is the Artists who has run and lived in both the Lempa and Limassol sites for around 14 years. The absence is very noticeable. In fact everything is pretty quiet this year. There are only 11 students and the town seems a lot less manic than last year. The students are a nice bunch; they have all been here for at least a week longer than me as I had to wait until after my exhibition opening.

So what have I done so far? Well I have visited some of my old haunts; swimming by the rocks by the harbour, the beach, Petros cafe for a ‘special’ sandwich.I did a talk on my work outside in the yard on Monday Thursday night and then we all wnet on the bus to Troodos to see the mountains. It was lovely a fresh this year; almost cold. And then it rained like I have never seen before, so much so that in the cafe I was eating, the rain found its way onto my (half cooked) pork chop. This was the cafe I vowed never to return to last year and it was even worse this year and I refused to pay for my lunch. I have started some small paintings on card but it is taking me a while to get into after the last few weeks of madness. I have moved into an another studio space today as I was not doing to well in the first one I chose. As the world cup is still on, most of the group are watching the games on tvs in cafes around the corner. Tonight is England – Portugal. My prediction, just for the record is England 0, Portugal 2 with Rooney getting injured.

Well, here is the beginnings of new Robbie Cyprus work. It is fairly familiar territory from previous year, but they are just me warming up. Hopefully i will be a lot more productive this week.