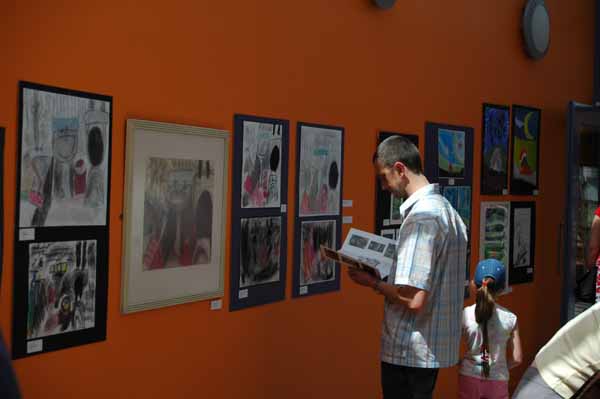 It is amazing what turn up on the net when you dig deep enough. On a vanity search for my own name on Google, I discovered a little gem under the heading of:

This turned out to be an art project for Schools in Shropshire which I could think of no reason why my name could be associated with, until I scolled down and read this:

Activities and techniques Using the 2-D aspect of the pictures, classes developed their own work in 3-D, a variety of scale and an amazing spectrum of materials. ‘Man in Bath’, a work by Robbie Bushe in charcoal and crayon, was interpreted into a 3-D diorama using Modroc and clay to create a bathroom scene. Pupils looked closely at the perspective and scale of Bushe’s work but produced their own colour and decorative variations.

I knew I had done many pictures which could have the title of Man in Bath, but I could not think of which is was, so I emailed the organiser of the project, Sara Grant Thorold (Arts Development Officer) and asked her to shed some light on this,. I was very intrigued. She replied as follows:

In 2003-4 I organised a project called Artbox, with a private collector called Eric Robinson, who was exploring leaving his extensive art collection to the people of Shropshire. It was a large ‘treasure chest’ designed by artist Andy Hazell containing 30 works of art from EricRobinson’s collection, together with a cd rom and a travelling curator. It went to 12 schools and was very successful. We organised an exhibition of some of the works of art created by pupils in response to the project, and there were a lot of ‘men in the bath’. Unfortunately, all these works are now back with the schools, but I will have a look at the photos from the exhibition and see if any men in baths were taken.

Now it came back to me. Eric Robinson, was in fact one of the first people to buy my work when I was a final year student at Edinburgh College of Art in 1989. He also bought a number of others in 1990 of which ‘man in bath’ must have been one.

Anyway, Sara very kindly sent me back this image which shows the above mentioned ‘man in bath’ exhibited with some of the results of the children’s project:

And here it is again after I had restretched it in photoshop so that you can see the image straight on:

As predicted, my painting has come to a stuttering halt as I make way for framing the work for the forthcoming shows which I am doing in the evenings at Brookes this week.

Today I had a visit from Sarah Wiseman of the Sarah Wiseman Gallery in Oxford. She had come to look at my work for possible inclusion in her gallery. So this gave me an excuse yesterday to do some spring cleaning down the studio and I even built myself a new painting trolley for my palette with selves for all my paints. I know my good friend Barry McGlashan will be amused by this..