Good Day in the Studio….at Last 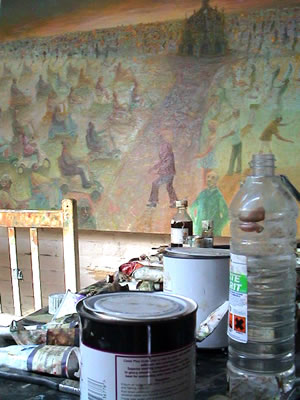 As I am going to visit my mum in Stranraer for the next few days, I was determined to have a good day in the studio and leave feeling good about my work. So I spent all day just working on my major Battle at Chichester Cross painting, and I think I made some headway. See what you think for yourself….

Actually, when I got down to my studio, I found that there was a band rehearsing in the room beneath my mezzanine in the roof of the warehouse where I work. They are a sort of Franz Ferdinand local group, apparently on the verge of the big time. Normally, they rehearse in the evenings, but I haven’t caught them ‘at it’, until today. They are a six piece outfit (with a sitar) and they had a record producer listening to them today. So, it was all boys bickering about volume levels and the producer telling them they need to start being able to ‘edit’ their own sound and not try to outplay each other…

Well instead of annoying me as I expected it would, I rather got into a wee world of my own and just decided to paint for the pure hell of it. And I think I had a good day. I had stopped protecting the figures on the left hand side which I had left since I blocked it in as I had liked the spirit of it. I also worked into the monument a bit and the receding background.

Last thing today, I decided to put a dark and prominent figure of a women on the road facing the buggies as if to confront them verbally. Well, the ice cream van didn’t work there (sorry no pictures of that aborted attempt) so I thought – ‘what the hell’.

And you know, it is a bit crude at the moment, but I think it is what the painting has been waiting for. It gives the painting more of a ‘subject’ which it was perhaps lacking. It is still terribly rough and badly drawn in places, but I think I can pull it off now. Going to have to wait a week until I come back from Scotland.