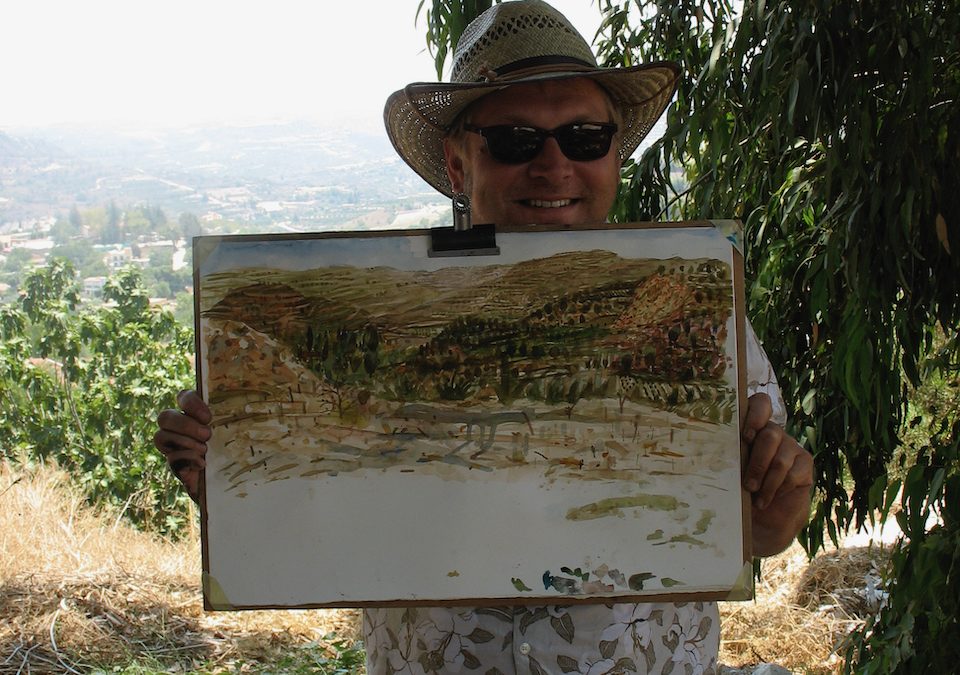 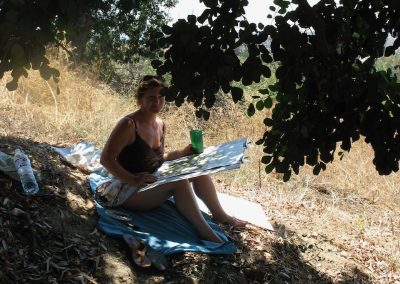 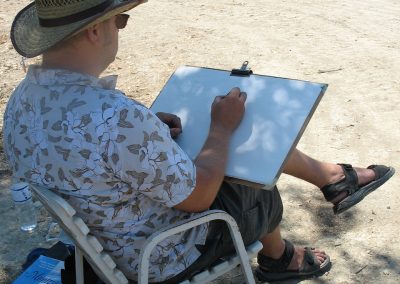 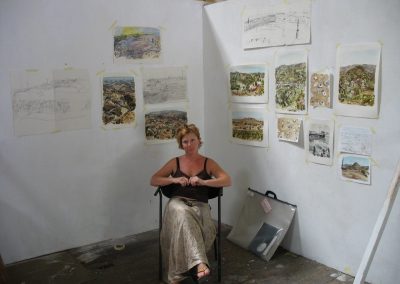 Well, I never did do any more blogs in Cyprus – which is a shame as I had a great time and got a lot out of it once again. I thought it was about time I at least did a resume of the last three weeks as to not leave too many large gaps on this blog. This will be a treat for those Roblog fans who love reading about my travel arrangements:

Catharine came out to Cyprus. I hired a car for the duration she was here and I drove over to Pafos airport to pick her up, via going to the Lempa site and driving over some of the hills to get more inspiration for my paintings. Catharine and I coped well with staying together in my little flat up the spiral staircase which used to be the the projectionists rooms in the old cinema. This was quite apt as I became the actual projectionist as I showed films in the cinema on through my laptop and projector onto the studio walls. Catharine and I had a few days driving around the island which included the long mountain journey over the Troodos to Polis. After a few days, Catharine got the painting bug and at first I joined her doing a couple of outside watercolours on the road from Pafos to Polis. She really got the bug and did numerous paintings over the next 5 days from locations she drive to over the island. I meanwhile, tried in earnest to paint in the studio while she went off. Another group arrived around the 17th to add the existing group and some also left. So, it was always a bit coming and going with the groups and maybe that did not enable a good social mix this year. The new group, however, did start to make a lot of work and use the studios well. Two old students of mine from Aberdeen were here this year; Nicola Galloway, whom I taught in 1995ish and Neil who I taught in 1998 (I think). Neil was in fact taking over my role when I left.

Limassol was at the centre of international news during all this time as refugees from the Lebanon were being ferried into the Port and filling up all the Hotels. I never saw anything of it despite being very close to the Port. There was the odd military boat and helicopter, but life seemed much as normal in Limassol.

Catharine left Cyprus and once again I was on my own in the wee flat and I thought I would have a productive final week. Unfortunately, I could only manage a bout three hours a day and left with three pictures unfinished. I do now have many ideas and this time I want to continue my Cyprus ideas when I get back which I have never been able to do. My last few days were a bit impoverished as I ran out of money so I cooked simple food with stuff from the market.. and swam in the sea. My flight back involved a 4.00am taxi and I slept through my alarm and somehow managed to wake up at 4.15am to see that my taxi was waiting. In the rush, I left my laptop power cable, which bothered me all the way home. I wont forget the clear view of Cyprus from the plane as we flew right across the island and I could identify all the places I had driven to this time.

Catharine picked me up from Luton airport and drove me to her sister’s house in Watford. She is staying there while her house is having major work done. It was still the major UK heatwave which was weird after the heat in Cyprus. I was meant to be moving into a flat in Oxford this week, but it has been delayed for a month (dont ask!). I had to go into Brookes for three days this week and I met my new boss and sort out a few things for the new academic year.. No art as my studio is full of the boxes which are my life..

I got the train down to Hastings (on my own) to stay with my sister’s family for a few days. Straight away I was thrown into wonderful BBQs, film competitions in a tent on the castle hill, picnics on the East hill, cinema trips with Mae and Harper, and then taking them on a time travelling adventure in their bedroom!!. A wonderful time and I will always speak up for the virtues of Hastings and especially at this time of the year.

I trained it back up to London, where I met up with Catharine for a flying visit though the National Gallery and a wander, before I coached it back through to Oxford, where I stayed at my friends Claire and Richard’s. Had a super night out in Oxford with Claire, Richard, Beth and Hannah to see off Beth who is moving to Newcastle soon. I had one day back at work and I also put in an application for a job which has come up at Glasgow School of Art, Wont say much about it here as I dint want to jinx my chances.

I had about early call as I had to get the Gatwick express coach at 4am to catch a 6.25am easyjet flight to Edinburgh. But once I woke up (3.30am) I soon realised that really I should have got the 3.00am coach as I was cutting it very fine as the check in desk closed at 5.55am. I got to Gatwick at 5.53am and ran to the check in. But this was Thursday 10th August and as I am sure most of you will know, this was the morning which there was a major security alert at airports all over the UK. No hand luggage at all allowed on the planes. The easyjet checkin were total chaos and no lines moved for over 2 hours. However, eventually, my flight was called to check in and somehow I made it to the plane which took off 3 hours late. Good job as all other flights after this were cancelled. I was relieved my laptop bag survived the luggage hold… I had hired a car from Edinburgh airport as I was due to spent three days over at my mum’s in Stranraer. I had a lovely drive through to Ayr and down the cost to the Mull of Galloway. Nice to see Ailsa Craig (the rock in the Irish sea) again. Had a great time at my mum’s? We drove about the area and I helped her in wonderful garden. At one point right down at the bottom of the Mull we could see the Isle of Mann, Cumbria and Northern Ireland all at the same time.

Tomorrow, is my first day teaching on the Edinburgh college of art summer school which I am doing all week. I am also due to stay at Jane’s in Bonnyrigg, my brothers in in Stockbridge and John and Ciara’s in Glasgow at the weekend. Phew! Will I survive?

Find out in the next exciting instalment of Roblog – coming soon.

(Pictures will be added to this Blog when I get round to it.)