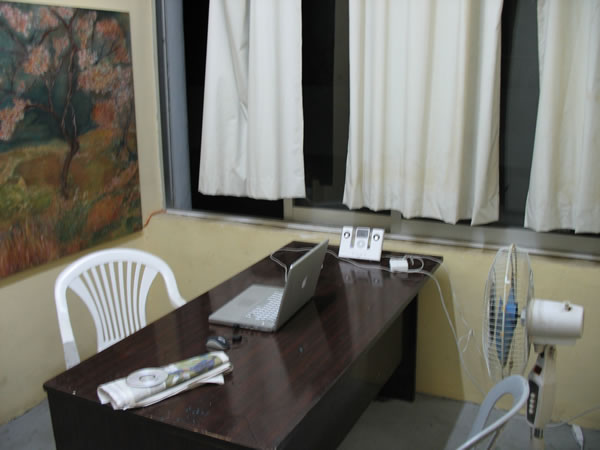 Even though I am more set up for casual blogging out here in Cyprus than ever before, the very ease of it seems to be stopping me doing it every few days as I did last year. Then, I had to take my bulky DV cam up to one of the excruciatingly slow internet cafes and try to do this blog. Now, with my own little apartment, my powerbook, wireless broadband and a dinky digital camera, perhaps it is all too easy.

Anyway, here is a blog. With lots of pictures. So don’t complain!

So how have things been going? Well after the rain there was more rain in Limassol (very quick but heavy) and overall the weather has been a lot cooler, windier and unpredictable than any of my previous visits. The group of students swelled in size at the start of July and this weekend about 8 of the original students are leaving and a new group will arrive. I have not been socializing with them as much as in the past as I am definitely the staff chappie here this time with my own bohemian flat and no Grahame and Liese. I have found it more difficult to get into a working groove this time too. It is perhaps all too familiar from last year and needed to find fresher stimulus to get my mind and brush going.

I continued in hope with painting the beach bathers and did a couple of more worked oils on card which are ok. But not really any kind of breakthrough. it was not until I hired a car last Tuesday to pick up Catharine from Pafos Airport when my visual mind started to get a bit more excited. Before I picked up Catharine I had a day driving over the island. I first went to Lemba (the original Cyprus College of Art) to see the place and Neil who looks after it. The place still looked great and it was great to see Neil. He has a much smaller group but all doing some good work. (Less distraction there as it takes half an hour to walk to the beach). After that I drove over to Polis which is a nice route over some great landscape. I stopped at a little coastal campsite where the water is actually very warm.

So I eventually picked up Catharine from the airport later that day and we drove back to Limassol. I took her to Heros Square, a squalid little part of Limassol where there is an amazing cafe, or at least it does great food for very little money. Then it was off to Dolce, a slinky little funky bar where most of the students were hanging out. Cocktails. Catharine seemed to enjoy her first night.

Yesterday I took Catharine around Limassol and in the afternoon we drove to Aphrodities Rock, a wonderful and dramatic bay where we had a bit of a swim. Then I introduced her to the endurance test of a full Meze meal – 22 seperate items which just keep coming.

So today, Catharine is away exploring while I got on with some painting and think I am making some headway now. We plan to go off in the car tomorrow do get some direct drawing done from the landscape. I have taken hundreds of photograph as well and this year I am determined to carry on with some of the images when I get back to Oxford.

Oh, the world cup? Well my prediction about England was not too far off the mark. Italy? Who would have thought it? In the final rounds it all got a bit disappointing. I actually wanted Germany to win as they played the most exciting football to watch.