A day drawing around Hastings 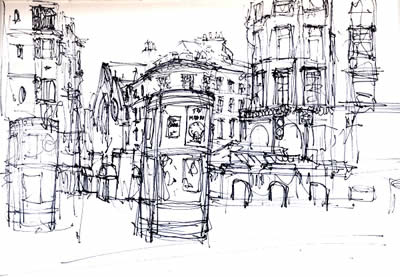 Not able to face up to getting stuck into my big painting at the studio, I spent most of yesterday wandering around Hastings (after I had posted my job applications) and trying to draw in my book.

This of course was entirely diversion tactics as I am putting off facing up to the challenge of completing my big painting Battle at Chichester Cross. So, after I had posted my job applications, I went for a long wander around a fairly busy and sunny Hastings. I was actually trying to get people as I have become concerned that the people in my paintings have become far too generic. I need to re-look at faces, posture and clothing styles. I actually found this quite difficult as every time I started to draw someone , they would notice and start to scowl at me. terrifying! So locations once again became the thing and I would try to quickly capture faces as they passed me by.

I had it in my head to put an ice cream van on the road in my Battle painting. I thought it would add some much-needed irony into this pseudo serious subject. So I found an ice cream van at just the right angle viewed from the green by Hastings Castle. “Excellent’, I thought once I had done the drawings.

So I went straight down to the studio to paint in the van. Way Hey!! Two hours of purposeful painting passed and then I sat down to ponder at what I had done. It was awful!!! it distracted so much from the overall scheme and had now become ‘ice cream van at Chichester cross’. I thought of ways in which I could readjust the tone and colour, but in the end I wiped the van, Then I had another two anxious hours painting while I tried to rescue the whole painting. When you wipe something off, it makes the whole painting look dirty and murky.

Only when I go down today, will I know how bad or good things got yesterday. 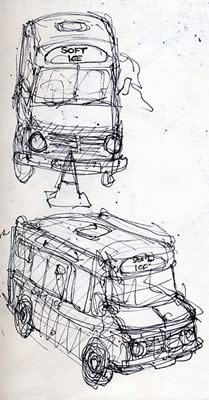 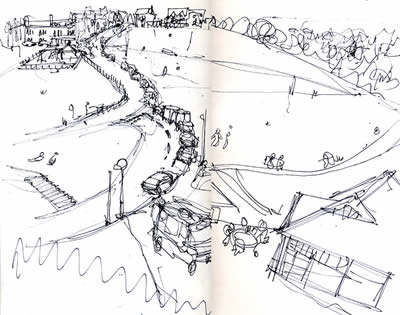